by Dorine Muraille on Splinter Series 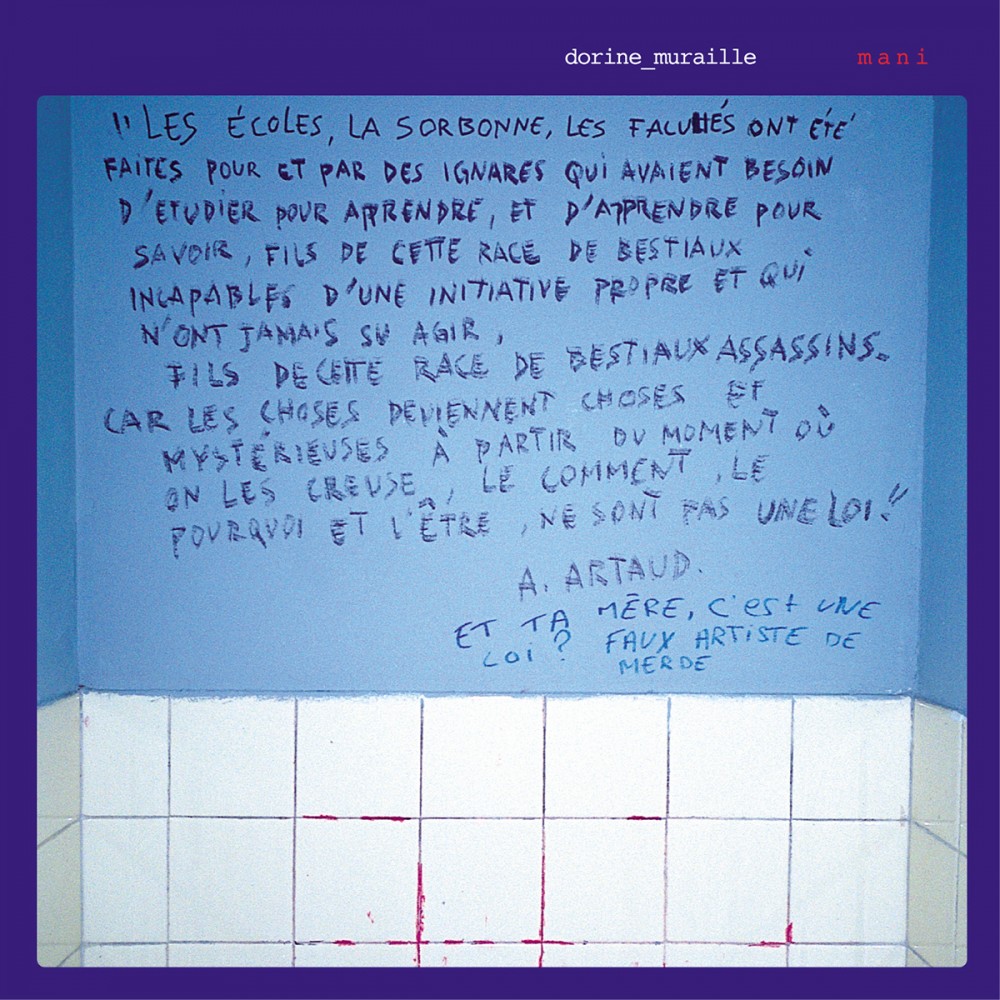 Dorine_Muraille is the alias of Julien Loquet, a 25-year-old Frenchman, currently living in Cherbourg. Having previously recorded under the name :Gel (releasing an album and 12” on the Artefact label, and singles on Active Suspension, Intercontinental and Goomdisques), Julien’s new material under the ‘Dorine_Muraille’ alias marks a slight shift in emphasis.

Instrumental recordings (double bass, voice, piano, guitars) are taken into a powerbook, arranged and processed through various software, before the results are reconstructed in the final mix on computer. The resultant tracks form an incredibly dense and intricate series of textured layers and melodic clips, an almost Rococo overflowing of ornamental detail. Yet despite this spiralling chaos, ‘Mani’ remains a highly beautiful musical work. Sweet, sublime French singing and melodic instrumental lines are cracked and refracted through laptop processing. Drawing on the traditions of Chansons Francaise and old English folk, yet exploding those start-points into fractured new forms, Dorine_Muraille could be framed alongside digital peers like Fennesz, Pimmon or Oval, yet works to create something genuinely new and distinctive, what’s perhaps best described as a kind of ‘ketamine laptop folk’ – despite being anchored by traditional song-forms, the listener’s perception of time and space becomes jarred and disrupted through the slurred chaos of collapsing details.

From light and pretty melodics to sprawling, chrystalline soundscapes of constant change to fiercer squalls and storms, the album flows along with its own skewed logic and self-assurance. Like the giddy, light-headed, swept-away rush and gush of young love or schizophrenic hallucination, this is an album to fully lose yourself in, an album that inspires obsession. Tracks flicker and flower with the rapid, glitchy motion of time-lapse photography. Interspersed within these chaotic, fractal tracks are four ultra-sparse, barely-there piano tracks, each acting as a kind of brief decompression chamber, a calm space for reconditioning the ears.

Fuelled by a strong interest in collaboration, Dorine_Muraille works by gathering very different girls and boys together, not necessarily musicians, and loves to have girls from his private life singing on his music (shades of serge Gainsbourgh), which he describes as ‘pop / folk’. As well as working on a collaborative track with French performer Jean-Louis Costès, Dorine_Muraille has also collaborated with Japanese singer Noriko Tujiko (who records for Mego), and has planned a remix collaboration with Scott Heren (Prefuse 73) under Heren’s Savath+Savalas alias.

The girl singing on this album is a young French writer called Chloe Delaume. Totally unknown a year ago when they began to work together, she then published her second book, "le cri du sablier", which became a big success in France for a novel so "experimental" and won the ‘Decembre’ prize for literature.