by Minor Pieces on FatCat Records 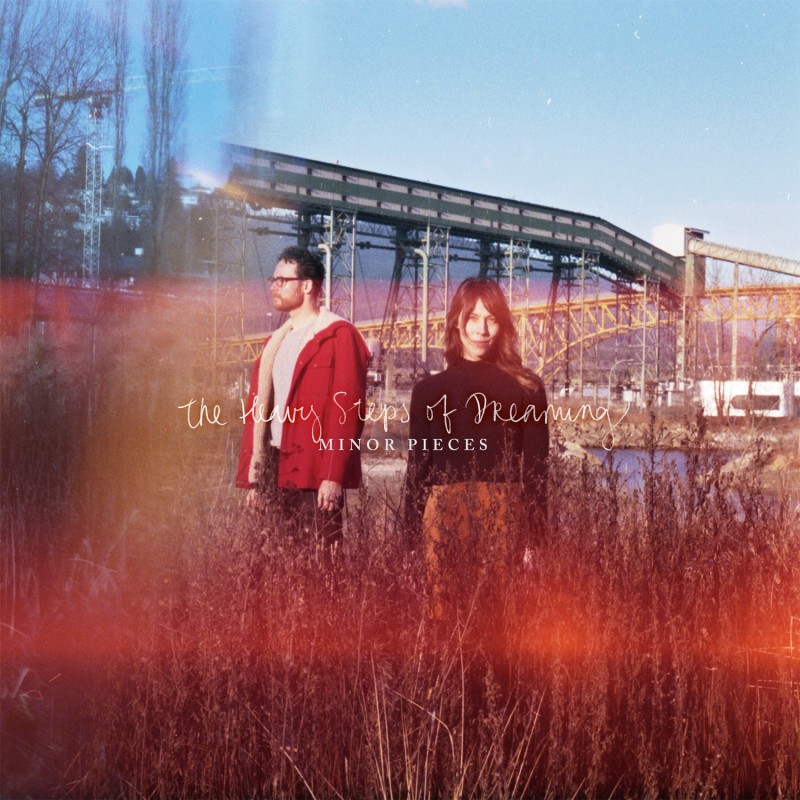 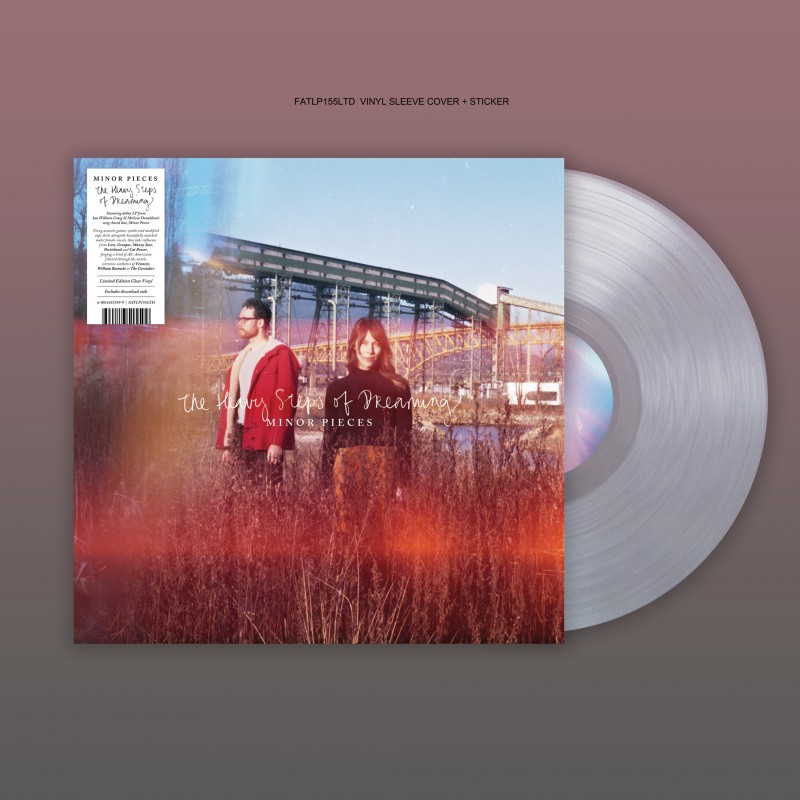 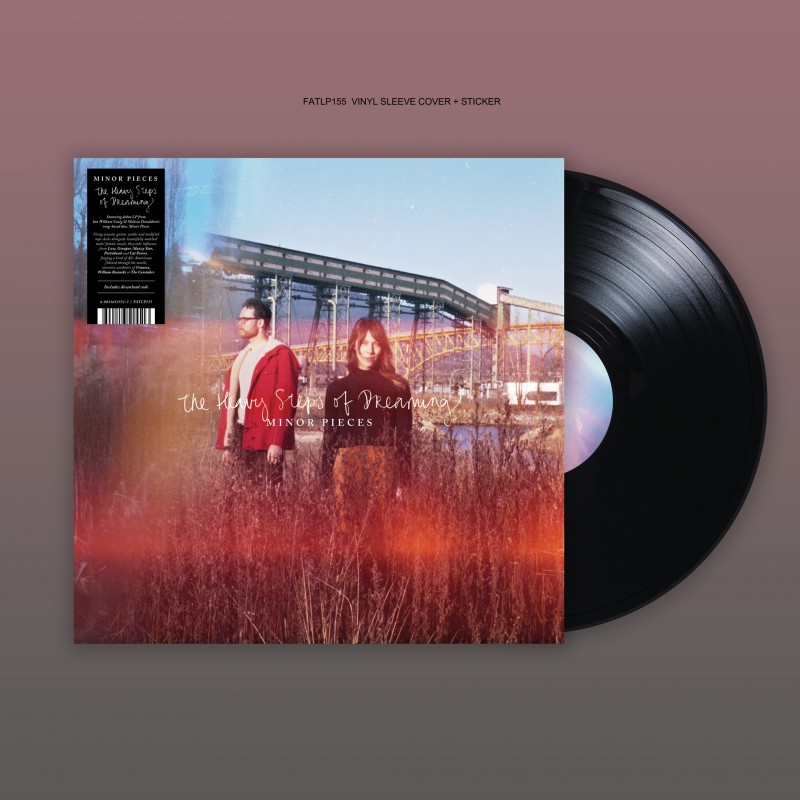 ‘The Heavy Steps Of Dreaming’ is the brilliant debut album from Vancouver-based Minor Pieces, a new songwriting partnership comprising acclaimed singer/composer Ian William Craig and newcomer Missy Donaldson, a singer and multi-instrumentalist. Retaining some of the textural play and experimentation of Ian’s solo material whilst channeling it squarely within the domain of tangible songwriting, the pair utilise guitar, modified tape decks, bass and synths to fashion deeply-felt songs with their beautifully matched male/ female vocals standing resolutely centre-stage. Taking influence and inspiration from the likes of Low, Grouper, Mazzy Star, Portishead, My Bloody Valentine, Talk Talk and Cat Power, ‘The Heavy Steps Of Dreaming’ sounds at once familiar whilst forging something new, unique and beyond the sum of its influences.

A classically-trained vocalist, Ian has released ten solo albums since 2011, receiving increasingly widespread critical praise for his work. Peers like Max Richter and Sigur Rós have become fans. Mojo described him as a “singer manipulating analogue recordings of his own voice to conjure up bewitching traceries of phantom arias, born from warped tape and sonic decay … destroying his own work, yet creating something more elegiac and profound in the process”; Rolling Stone pinned his sound as “like a collaboration between between Bon Iver and William Basinski”; whilst Pitchfork marvelled at the “vast ocean of beauty within his music.” Unreleased as an artist up to now, Missy grew up around music, eventually studying it and making a career as a music therapist. Having been introduced through mutual friends in 2013, the pair came together as a musical partnership at the start of 2017. They booked a debut show before even rehearsing and over the past couple of years played several low key gigs in and around Vancouver, whilst learning about each other as artists and gradually working out ways of combining their different creative processes.

A long time in gestation, the album originates in a set of songs Ian had been working on whilst still in art school without finding successful resolution. Aiming to write “the kind of songs that I’d want to hear when I was sad, to help me feel better - not expressive so much as hopeful”, they were pushed and pulled through Ian’s idiosyncratic processing, until he felt that they’d been destroyed to the extent of no longer being 'songs', but something in need of a fresh perspective, a different approach. “I couldn’t get them right and was getting tired of chewing on my own tail. I'd made an attempt at recording most of them solo during the same sessions as ‘Centres’ but they just didn’t sit right. They needed to see the light of day a bit more to flourish, as opposed to getting buried underneath all of my usual textured chaos.” Entering with her own set of instincts and sensibilities, Missy brought not just her own gorgeous singing voice (and equal contributions on keyboard and tape loops and FX), but the vital new angles and vision to help guide the material towards a new becoming. Taking the name Minor Pieces (a reference to bishops and knights in a game of chess), they dialled back significantly from the densely occluded, amorphous abstraction of Ian’s solo material, to foreground the structural strength of the songwriting and the purity of the pair’s voices. Whilst seven of the eight songs here were penned by Ian, their ultimate success is fundamentally collaborative.

Ian’s 2016 EP, ‘Slow Vessels’ might have offered a brief glimpse of this more pared back acoustic approach, but if you’re looking for touchstones, perhaps the closest contemporary comparison would be with Low’s abraded 2018 opus, ‘Double Negative’. In reality, though, there’s little else that compares with this striking and singular music. Arriving perfectly formed and confident in its own vision, the record both breaks new ground and bears the hallmarks of a classic singer-songwriter album / partnership.
‘The Heavy Steps of Dreaming’ is a stunning first offering, a striking and potent collection of songs that are simultaneously richly detailed and immersive. Over the course of its 8 tracks - from the opening bars of ‘Rothko’ to the resonant closing lines of ‘ShipBreaking’ - the duo move fluidly between voices, shift from moments of overwhelming power to perfect points of stillness; from acoustic balladry pared down to the sparsest of means to thick, tumbling swells of tape and electronics or billowing synth trails. At both album and song level, it’s a work of contrasts and combinations; of broad, bold dynamics. Masterfully crafted, the lyrics are rendered with an almost painterly approach and reveal a palpable joy in the richness of language and its capacity to conjur resonances, to hold moments close and to patch together meaning from life’s scattered detritus. What’s forged is a kind of Alt. Americana filtered through a progressive modern lens and the tactile, heavily processed tactics of Ian’s solo practice – an approach that links to the corrosive asethetics of electronic artists like Fennesz, William Basinski or The Caretaker. There are tracks (or parts of tracks) where some of that heavily textured production trickery is foregrounded; moments were the songs are submerged beneath miasmic veils of airy synth or rumbling banks of tape fog. Where ghost-clusters of distortion limn the borders.

‘Rothko’ opens the album on Ian and Missy’s interlocked voices, before the steel-strung strumming breaks down into a tape-manipluated hall-of-mirrors. ‘This House’ switches to Missy’s vocal lead and a heavily muffled / distorted bass pulse, over which veils of synth sound emerge and gradually deteriorate. The beautiful ‘Bravallagata’ recounts memories of a Christmas spent in Rejkjavik, whilst ‘Grace’ – the sole song on the LP written by Missy moments after leaving the hospice where she had said goodbye to her beloved grandmother, who passed away an hour later – is flooded with duplicated layers of voice and faltering playback. Following on, ‘Burden’ works as a beautiful counterpoint - stripping everything back again to the simplicity of acoustic guitar and voice. ‘The Way We are In Song’ muses on how “we form our mouths in perfect words / but the sound we go to make is always gone”, how "we’re never quite content to let the things we do stay wonderfully wrong”. A minimalist mantra, ‘Tender Fire’ comes the closest to both the sacral and also to experimental dissolution. Closing the album on its most expansive track, ‘Shipbreaking’ is an epic, 10-minute long odyssey that winds its way through a succession of parts – from dense and distorted, to airy ambient lushness and ending in a slow and sparsely beautiful picked guitar and some of the most resonant lyrics on the album.

Recorded by Paul Stewart at Watch Yer Head studios in Vancouver in the summer of 2018, the album was captured over eight days of recording and was mixed in four days. As Ian notes, “the whole thing came together rather quickly as far as recording, but we did spend a long time in rehearsal getting things to where they needed to be. We attempted to do most things live, and then push and pull elements out with some overdubbing. It was a different process that what I would usually do, where the composing itself would come out of the recording sessions collaged together; this was an attempt to capture things in the moment as they happened, an energy, a space, things spilling over the edges.”
The staple elements of acoustic guitar, keyboard and male / female voices are augmented with a touch of bass, and a small arsenal of electronic gear. Here, the duo’s kit list includes a pair of Ian’s customised vintage reel to reel tape machines (a Marantz PMD221 and Sony TC-377), a shortwave radio, several synths (a Roland VP03 vocoder, Dave Smith Prophet ’08 PE, Nanozwerg, and a Landscape Stereo Field) and FX units (Roland Space Echo RE-201, Way Huge Supa Puss analogue delay, Demeter RVB1 Reverbulator).

Finding a coherent and beautifully measured equilibrium between the male and female; the direct and the expansive; between crystalline clarity and faltering obfuscation; the anchoring of pop hooks and the experimental pull of immersive textural density, the album is tender, graceful and emotionally powerful. Born of an intensely artistic sensibility, humble yet rendered with brilliance and utter conviction, it’s a record that manages to pull off a kind of easy intimacy, that has great depth to withstand and reward repeat listening. 'The Heavy Steps Of Dreaming’ is an immeasurably deep, warm, grainy, honest and utterly brilliant debut album. A place you’ll want to linger in and return to.