by Various Artists on Split Series 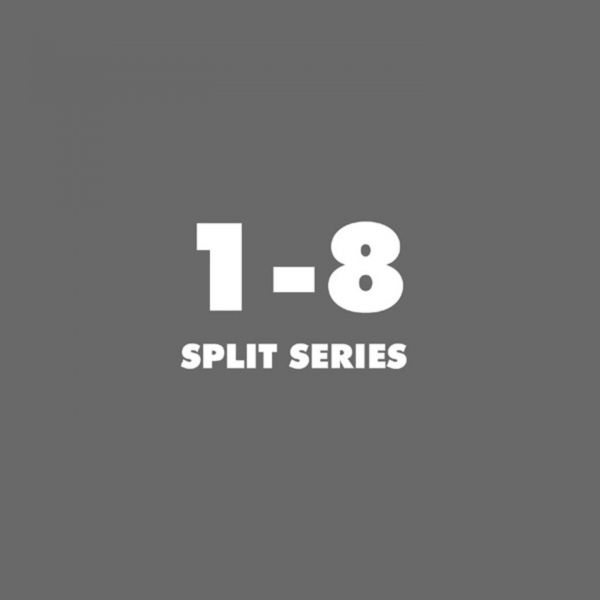 'Split Series 1-8' collects together 11 tracks released under FatCat's distinctive, much-acclaimed split 12" series, and marks the culmination of the first phase of the series. Curated by Obsessive Eye editor Dave Howell, the aim of the series has always been to mix and merge divergent sounds and styles (from post-rock to electronica, isolationism to hardcore, hip hop, noise, improv, turntablism), different takes on construction, to chart a more abstract, leftfield terrain for the label, whilst giving a platform to new and emerging artists (Janek Schaefer, Chasm and Team Doyobi all made their debut outings via this series).

Available as a CD-only release (the first time any of these tracks have seen a CD release), the original releases came exclusively on vinyl, packaged in a distinctive, minimalist aesthetic. Individually numbered, and containing no textual information, each release was identified purely by a hole punched in its plain white sleeve (one hole for the first release, two for the second, three for the third, etc.). Allowing for a total of 24 releases, the series will yield three compilation CDs (1-8; 9-16; 17-24), of which this is the first.

Ironically beginning with the fuzzy sound of a needle tugging through vinyl, the CD opens with 'tri-phonic' turntablist Janek Schaefer's shimmering, shifting sound collage. Having navigated this beatless zone, the album then moves into two tracks of gritty, deterritorialised electronics from Leeds-based Team Doyobi and V/Vm, Stockport's finest.

Ex-Third Eye Foundation member Foehn (whose album is due out on FatCat in February) then provides a chilling soundscape of spectral, subterranean ambience and flickering rhythm-clusters. A massive track from Gescom (Auetchre's Rob Brown collaborating here with Skam DJ, Rob Hall) follows, before Kranky artist James Plotkin unfolds an individual take on guitar deconstruction - a cold, spartan landscape of alien atmospherics. The harsh neon focus of Chasm's 'Phonn' maintains the chill, and is linked to Req's grainy, low-end hip hop in their mutual concern with close-miced concrete recording techniques.

Following on comes the Third Eye Foundation track that opened the series; Speedranch ^ Jansky Noise's masasively fucked-up beat monster; and, finally, as an EXCLUSIVE to the compilation, Merzbow's towering, 15-minute long 'Ab Hunter', the track which had to be replaced on the Merzbow v AMM split, due to it being too fierce to cut onto vinyl!!